We are very proud and pleased to learn that The Allentown Band placed 2nd in the 2021 National American Prize in the Community Band Division.

CONGRATULATIONS to Gerald Gilbeaux and the Acadian Wind Symphony on winning this prestigious honor this year.

More on The American Prize

The Acadian Wind Symphony was founded by conductor, Gerald Guilbeaux during the summer of 1994 with a special invitation to professional and amateur wind and percussion players from the South Louisiana. The Ensemble is a collection of some of Acadiana’s top instrumentalists dedicated to the performance of traditional and contemporary masterworks for band. It provides an opportunity for serious wind players and percussionists from the Lafayette area to share in the highest level of musical expression and artistry. Many of the members perform professionally with the Acadiana Symphony Orchestra, while others have performed in various other collegiate, amateur and professional ensembles throughout the state of Louisiana. Though many of the members are professional musicians and/or music educators, many other walks of life are represented within the ranks of the organization.

All members of the Allentown Band approach their music-making in a professional manner, though none makes his or her living from music performance alone. Many, however, are teachers of music in schools and in private studios. Some teach a variety of subjects unrelated to music. Others are engaged in engineering, accounting, sales, insurance, medicine and dentistry, or in various office work or building trades. When they meet to perform, however, whether in a public park setting, retirement community, or in Carnegie Hall, both age and daytime vocation disappear. All effort is concentrated, striving for integrity, inspiration and impact whether performing an overture transcribed from opera, a modern composition written especially for concert band, or a Sousa march.

Although the COVID19 pandemic stalled its 43rd season, the Boulder Concert Band will play on. During the 1918 flu epidemic, Boulder’s community band, then called the Boulder Citizen’s Band, may have taken a break like us. But the band eventually played on, conducted by Bill Swarts, director, 1899-1919. The first records of a performing band in the city of Boulder date back to 1870. Several decades later, the Boulder Municipal Band was formed and was the first to include women musicians. Today's Boulder Concert Band was reorganized in 1976 by the late Hugh McMillen, former Director of Bands at the University of Colorado. Now directed by Dr. Kenneth Singleton, the current organization has more than 60 volunteer musicians. Its members are drawn from the business, professional, and educational communities in the Boulder County and Denver metro area. 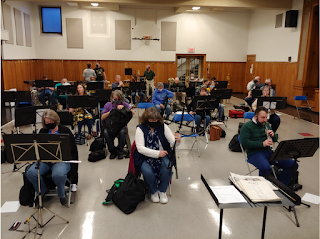 After thirteen (13!) months, The Allentown Band has resumed rehearsals on Tuesday April 20. As director Ron Demkee noted in a memo on Wednesday, " It was wonderful seeing many [band members], safely distanced, at our first rehearsal in 13 months! Thanks to Christ Church for making this possible.  Really looking forward to getting back to full strength and in-person concerts coming this summer." Strict safety protocols are being followed. Initial rehearsals are limited to musicians playing the upcoming May concerts. After 45 minutes, a break of 30 minutes is enforced to allow the air in the space to turn over completely. Brass instruments are using bell covers, and all musicians are using towels or pads to control moisture. Live concerts are about to start, too! In May, South Whitehall Township is sponsoring Mothers Day and Memorial Day concerts. Instead of these concerts being staged at the Springhouse Middle School, The Allentown Band is appearing at the beautiful Covered Br
Read more